NONE OF YA'LL SAFE

NONE OF YA'LL SAFE 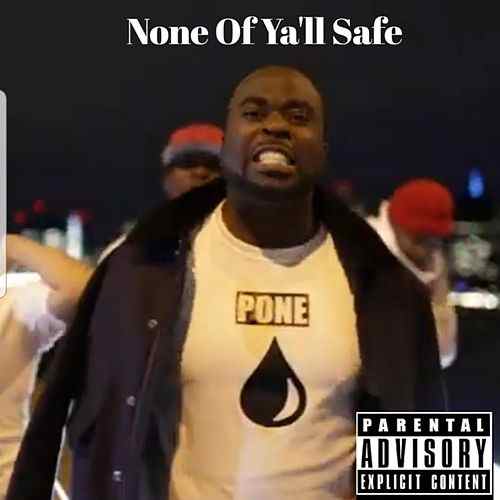 Pone is a hip-hop artist whose music captures the true essence of struggle and perserverance which are both key componenets of his life story.  Born and raised in Hartford Conneticut, Pone was introduce to the creation process of music when he use to catch his mothers boyfriend (Wayne) rapping around the house during his early childhood years. Intrigued on the way he saw Wayne putting words together from nothing, Pone soon followed suit and started to pick up and perfect the art of lyricism himself.  As he grew into his artistry Pone made sure to keep his ears open to multiple influences of music, no matter what the origin or genre.  This musical pallette soon gave Pone the needed versatility to carve out his own sound, one he describes as being full of power, enthusiasm and energy.  Just as he was gaining a wave of listeners his life suddenly experienced a dramatic shift when he was sentenced to serve over 7 years in prison.  During this time music was more important than ever as it became his crutch to normalsy and his gateway to the pursuit of a better life for himself and his family.  Upon his release he began taking advantage of the opportunities in front of him and started to release singles and music videos to make a statement to his supporters that he was back and ready to work.  Now after his hiatus he is in preperation of releasing his first full length project to date sometime in 2019.  He is looking to create a wave that will establish and legitamize his music domesticly and abroad as he continues his music journey and his path to ultimate success.

None Of Ya'll Safe